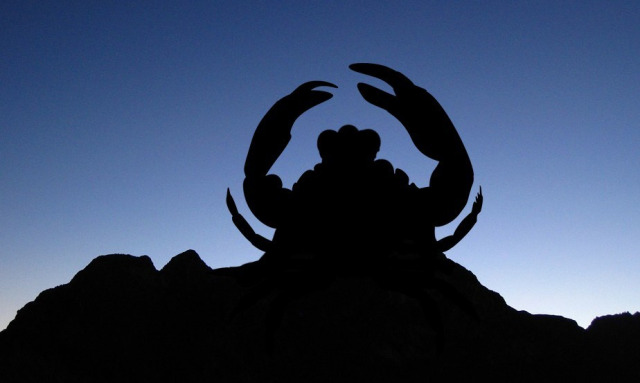 That is, if God had four eyes, four arms, and pincher-claw hands. And a giant mustache … which could, actually, be interpreted as mandibles.

It was undoubtably someone’s god. Carved out of a mountain, it loomed over the settlement and filled a quarter of the sky. There was a lot of talk about either moving the settlement, or building a new one on the other side of the mountain — because having this enormous four-eyed monster staring down at you all the time gave everyone the creeps.

Well, almost everyone. Philip Richard found it endlessly fascinating, and while most people built their homesteads to face away from it, looking instead out across the great expanse of the Dime River, Philip made sure the Godhead filled the view of his main picture window.

“Why did you do that? It’s hideous.” Regina stood next to him, sipping her drink and staring out the window. “The thing gives me nightmares.”

Regina was a beautiful second generation clone with blue eyes and dark hair. Philip had met her at the Politico rally a fortnight before. It had taken him this long to lure her over. “Maybe,” he said to Regina, “that’s what its purpose is.”

“To give people nightmares? It’s working.” Regina turned her back to the window. “Don’t you have curtains you can put up?”

“A blanket? Some foil?” Her face puckered like she were tasting something bad. “Bricks?”

“You should try not to look at it negatively,” he told her. “An ancient race dedicated lifetimes to creating this godhead, probably as a protector. And if you think about it, it’s still working — we, trespassers on this world, are completely freaked out by it — which for all we know is exactly what it’s supposed to do.”

“Of all the places on this world, it’s crazy that the Guardians chose to land the seed ship here, settle us here.” She shook her head. “They’re supposed to be so smart, why can’t they also be freaked out by the thing?”

“The Guardians saw it as a perfect starting point — the site of a former civilization,” Philip said. “We’re supposed to be inspired.”

“By a civilization that vanished? What if this godhead of theirs had something to do with them disappearing?”

Philip shrugged. “Evidence points to them evolving away from corporeal existence.”

“I don’t buy that, ‘they turned into The Force’ nonsense.”

He gave her a warm, genuine smile. “Neither do I, really.” They shared a look which quickly grew awkward, and finally he said, “If the view of the godhead bothers you we can go into the other room.” He pointed.

The silence stretched, growing even more awkward, and he thought that this wasn’t going to work. But then Regina said, “Okay. Anything to get away from that big creepy monster.” Her arms crossed in front of her, she walked through the doorway, and after a moment he followed.

The next morning Philip emerged, feeling incredible. The night had been awesome. He was in such a good mood that if he wasn’t afraid of waking Regina, he would have been whistling.

Gazing through the window at the godhead, it seemed to glow in the light of the rising sun. If he didn’t know better he’d say it looked alive, pulsing with energy and warmth. Putting his hands together in front of him, Philip gave a little bow to the godhead and thanked it. Sincerely, honestly, thanked it.

It was a fertility goddess.