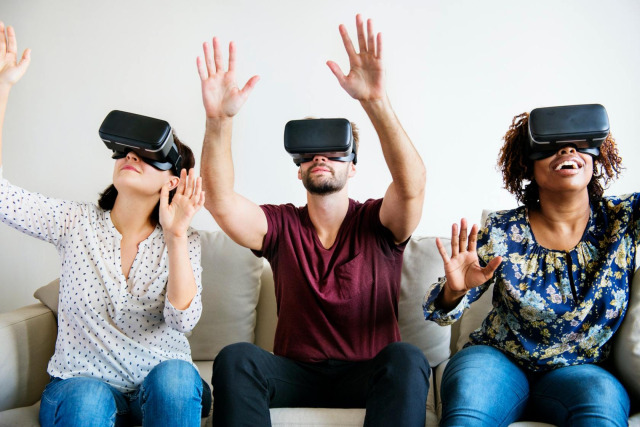 While I have used a type of virtual reality for years now, it’s always been on a screen in front of me. Things like Google Earth, Google Street View, and apps like Second Life have been familiar and useful to me when I want to get a unique feel for a place that I cannot actually visit in person.

Then, one day last year, my good friend and podcasting partner Joe started telling me about how much fun he and his wife have been having with their Oculus Quests, and that no, you don’t have to hook it to a $2500 gaming PC. It’s a self-contained $300 piece of tech.

The latest one, he told me — the Quest 2 — has even higher specs for an even lower price. The way he was talking, it made me think that perhaps VR hardware stood on the brink of being mainstream. The real kicker, though, was not about gaming — he told me that if I got a set, we could hang out in a virtual theater and watch videos on a screen that rivals the best of the best physical movie screens. They’re huge, he told me. It’s like being there.

In other words, Joe talked me into it.

Now, I did already have a headset, but it was one of those ones where you put a smartphone into it, and I had used it maybe three times before putting it back in its box and sticking it on a shelf — where it still sits today. I’ll just say it was an underwhelming experience.

But Joe emphatically told me the Quest 2 was different.

Now those who know me will tell you that when I get into something I find really interesting, I don’t just stick my toe into it. I get on a high dive and do a full cannonball right into the deep end. Not only did I buy myself one, but after trying it out, I immediately bought one for everyone in the family.

This, I thought, was real deal. A total game changer.

The next big thing.

Here’s the problem, though — it’s such a transformative experience that there’s no way to really relate it to someone who’s never done it. It’s kind of like losing your virginity. It’s crossing a major threashold into an entirely new level of experience.

I’m not so sure about earlier VR headsets — the cell phone based one I have only slightly hinted at this — but the Oculus Quest 2 put me into a whole other world. Your mind almost instantly accepts this new space you’re in as real. It’s the closest thing to actual teleportation I have ever experienced, and I know it’s not just me — my family members said the same thing. The weirdest part is not when you “go in” to the experience, it’s when you take the headset off and look around and realize, wow, I’m back. That for some reason is even more jarring — going from this big, Disneylandesq space, or the huge movie theater, or from beside a lake with a fishing pole in your hand, to suddenly being in the dimly lit little cluttered room in your house that you suddenly realize needs a good dusting and probably vacuuming.

One might at this point ask if we’re at the level of the movie Ready Player One.

Emphatically NO. But you can see it on the horizon. It’s there. Whether or not we want to go there is another question, and that is a whole other discussion.

When I told you I dive in like a cannonball, I’m not joking, because based on my Oculus Quest 2 experience I almost immediately did something I had already decided not to do — I bought the VR headset produced for my Playstation 4 Pro, because I wanted to see what it was like to actually immurse myself into the alien worlds I visit in the game No Man’s Sky.

I’m glad I went with the Oculus first, because it is far superior to the Playstation headset, with one exception — the Playstation headset is more comfortable to wear. Despite it’s lower image quality, I must admit it still gives me a very good feeling of what it’s like to walk the surface of alien worlds, with huge moons in the skies, and wondrous archways of planetary rings — and sunsets with sometimes two, or even three suns.

Which brings me to the actual subject of this artical. Research.

I’m the type of writer who likes to write what I know. I don’t like to guess. But until now, I have never been able to say I know what it’s like to walk on an (admittedly fictional) alien world.

I do now. And I’m using that experience in my writing.

But, also, in the Oculus Quest, I have a program that pulls in Google Street View, and allows me to take meandering walks in frozen time, down just about any street in the world. And it’s not like viewing it on a screen, it’s like standing right there on that street. I feel what it’s like to be there.

What an awesome tool!

That’s right. Tool. Not toy. This is an incredibly useful tool for researching locations for fiction. That app in the Oculus store only cost $9.99, and it is going to save me literally thousands upon thousands of dollars in travel expense — and probably prevent me from contracting a certain troublesome virus.

And you’d better believe I’m going to write all this off as an expense on my taxes.

Now, it’s not going to completely replace travel. When the pandemic subsides, there are a few places I really need to visit. And I will. But until then, I’ll be donning my headset and teleporting to places — here on Earth, and elsewhere in the galaxy.

If you ever needed an excuse to try one of these out, especially the stand-alone Oculus Quest 2, I say give it a go. You won’t really know what it’s like until you do it yourself.